Phineas Rixon and His Three Wives

Do you have a photo of Phineas? I am writing a family history book, and would love to include his picture, but I’ve never come across one. If you can help, please contact me at janhamilton66@gmail.com. 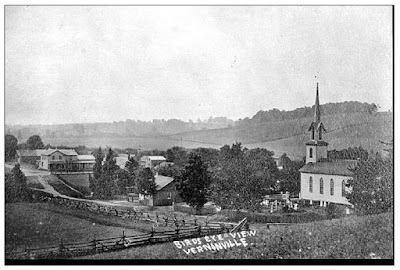 Farmer Phineas Rixon and his wife Barbara had been out doing errands in town. After they returned home, he was getting ready to do chores when he was stricken by a heart attack. The doctor came, but Phineas never regained consciousness. He died two days later, age 78, on Friday, September 9, 1938, on the farm he had operated for almost 40 years.

The local newspaper, The Colborne Express, reported, “the large number floral tributes and friends present [at the funeral] showed the high esteem in which he was held.”1

These few facts about his last days are the most detail I found about my great-great uncle’s long life. Phineas seldom moved far from his birthplace in rural Northumberland County, Ontario, a few miles from the shores of Lake Ontario. However, considering that his first two wives and his daughter predeceased him, and that he married a third time at age 76, his home life must have had its ups and downs.

Phineas (also spelled Phinehas, Phenas, and other variations) was born on May 8, 1859,2 the son of Martha Rixon and probably of her cousin Thomas Rixon.3 His unmarried mother moved to the United States when he was about nine, leaving him and his sister Samantha (my great-grandmother) to be brought up by their grandparents, Thomas and Betsey Rixon, on their farm in Cramahe Township.

It is not clear where Samantha and Phineas lived after their grandparent’s deaths; by then they were teenagers, and they likely stayed with relatives.

In 1878, Phineas joined the militia and was listed as a private in the 40th Regiment Northumberland. He next appeared in the 1880 U.S. Census (as “Fenis Rickson,”) working as a labourer in Michigan. He must have stayed in the United States for at least a year as he was not counted in the 1881 Census of Canada.

At age 24, he married 18-year-old Almeda Warner, daughter of John Warner and Harriet Morden. Phineas’s and Almeda’s daughter, Samantha Almeda Rixon (usually known as Mattie or Medie,) was born in June, 1884. Almeda died of typhoid fever in December, 1897, aged 32, leaving Phineas with a 13-year-old to raise and a farm to run on his own. 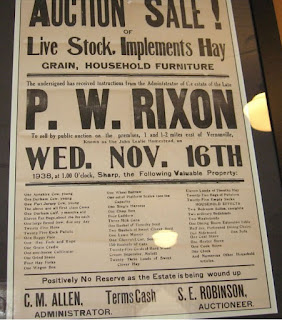 Within four years, Phineas had remarried. The 1901 census showed Phineas, 41, married to Mary Leslie, 34. With them were his daughter, Mattie, 16, and Mary’s mother and her two sisters, both in their twenties. He had also moved from Cramahe Township to lot 6, Concession 4, Haldimand Township.4 An advertisement for an estate auction held soon after Phineas’s death said the auction would be held on the John Leslie Homestead, about a mile east of the village of Vernonville, so Phineas and Mary must have lived on what had been her parents’ farm.

Phineas and Mary were married for about 30 years. After she died in January, 1931, he remained single for the next five years. In May, 1936, he remarried. His third wife was a widow, Barbara Jemima (Haynes) Cowey.5

Phineas was buried in Castleton Cemetery, Cramahe, Northumberland County, with his first wife and his daughter. Medie, who was married in 1906 to farmer Claude Tweed and had six children, died in 1915.  Barbara, died in 1939, age 73.


This article is also posted on www.genealogyensemble.com

When Jessie Jean Forrester (1896-1961) married a Presbyterian minister, she committed herself to a very different life from the one she had been accustomed to growing up on the Manitoba prairie. For almost 25 years, the couple lived in India, where he served as a missionary. There they were surrounded by the soaring Himalayas and elaborate temples, they suffered the heat of the central plains and humidity of monsoons, and they enjoyed eating Indian food.

There were some scary moments too. On one occasion, they were staying in a camp, complete with tea service. Jessie got up to go to the bathroom during the night and, as she was passing through the privacy screen, she saw a tiger roaming the camp.

The youngest daughter of farmers Jack and Samantha (Rixon) Forrester, Jessie first left Manitoba as a teenager, accompanying her parents when they retired to Los Angeles around 1911.

The 1920 U.S. census found her at age 24, living with her parents and working as a book keeper for a hardware store. The following year, she and her mother were counted in the 1921 census of Canada, staying with Jessie’s older sister (and my grandmother,) Lillian Hamilton, and her family in Winnipeg. They were probably busy preparing for the wedding.

Jessie’s husband-to-be, Thomas Benjamin McMillan, was born in 1888 in Margaret, Manitoba. The McMillan family eventually moved to Winnipeg. Tom graduated from Manitoba College with a degree in economics, then served as a lieutenant in the Royal Flying Corps during World War I. After the war, he returned to Winnipeg and completed a two-year course in theology.

Jessie and Tom were married on August 17, 1921. Three weeks later, the newlyweds left for India. Daughter Hazel Lillian (born 1922) and son Hugh Forrester (born 1924) were both born in India and attended Woodstock School, Landour, a school founded in the 19th century to educate the children of American missionaries. They also attended school in Winnipeg during extended visits to Canada.

Tom went to India as a Presbyterian minister, but after the creation of the United Church of Canada by Presbyterian, Methodist and Congregationalist congregations in 1925, he became a United Church missionary.  Much of his work was based in the central Indian cities of Hat Piplia, Neemuch and Indore, in the state of Madhya Pradesh. When the weather in central India became too hot, the family retreated to the twin cities of Landour and Mussoorie, in the foothills of the Himalayas. When son Hugh McMillan and his wife visited Mussoorie in 1979, they found the cosmos flowers Jessie had planted many years before still seeding themselves and blooming.1

Besides serving as a pastor, Tom was also active on several committees. In central India, he served as chairman of the building committee for 10 years and secretary of the Evangelistic Commission for three years, and he was a delegate to the General Assembly of the United Church of North India and chairman of the Assembly Business Commission.

Tom and Jessie remained in India during World War II, but 19-year-old Hazel returned to North America in 1941 to stay her uncle and aunt in Los Angeles, and Hugh sailed to California in 1944. Both were accustomed to long sea voyages, having travelled back and forth with their parents every few years to visit friends and relatives in Winnipeg and Los Angeles, but it must have been frightening for them to travel alone in wartime. Tom and Jessie came back to Canada for good after the war ended and before Indian independence.

The McMillans settled in British Columbia, where Tom ministered to several United Church congregations. After he retired in 1960 at age 72, they settled in Victoria, where he continued to visit the sick and served as an associate minister at Oak Bay United Church until 1964.

When Jessie died in 1961, aged 65, her obituary in the Ladysmith-Chemainus Chronicle called her “a woman of great dignity and artistic ability,” adding that the bazaars and festive occasions at the two local United churches where Tom had been minister for four years were made more attractive by her deft floral arrangements. Tom died in 1965 at age 77 and was buried beside his wife in Royal Oak Burial Park, Saanich, B.C..

(This article is also published on the collaborative blog Genealogy Ensemble.)