We are not supposed to make value judgments about our ancestors, but it is hard not to like some more than others. One of my favourites is my three-times great-grandmother, Mary Ann Clark Bagg. What swayed me is the epitaph on her grave in Montreal’s Mount Royal Cemetery, which says, “To the poor a kind and sympathizing friend.”

Her portrait is also appealing. Probably painted in honour of her wedding, it shows a slim young woman in a low-cut, filmy white dress. Fashionable curls frame her face, her eyes are deep brown and there’s a hint of a smile on her lips.

Mary Ann, the daughter of John Clark and Mary Mitcheson, was baptized in July 1795, at the parish church in Lanchester, County Durham, England. A few years later, the family left England and settled in Montreal. When Mary Ann was 10, a baby brother arrived, but he died six months later, so she grew up an only child.

Her father, a butcher and meat inspector, purchased a farm on Saint Lawrence Street, at that time the only road leading north from the city gates. Later, he bought several other farms nearby. This is now a densely populated area known as the Plateau, but when Mary Ann was a child, there were few neighbours. I sometimes wonder whether she was lonely. Did she have to do chores for the cows and pigs, or did she have a governess to supervise her lessons and needlework?

Although he was to live another 17 years, Clark wrote his will in 1810. In it, he mentioned that Mary Ann was then in England. Perhaps she was visiting her grandparents in Durham, or staying with an uncle’s family in London.

In 1819, Mary Ann married merchant Stanley Bagg. Seven years her senior, Stanley had been a tenant of John Clark (he and his father leased the Mile End Tavern from him for eight years) and they were business partners, supplying beef to the British army. 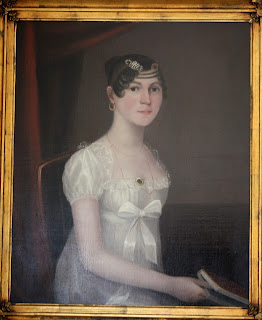 In November 1834, Mary Ann must have realized she was very ill. A notary prepared her will in which she left her property to her son, with her husband as executor until Stanley Clark Bagg reached 21. She died on 10 February, 1835, aged 39 years, leaving behind her husband, her teenaged son and her mother. Although he lived another 18 years, Stanley did not remarry.

Research Remarks:  The Bibliothèque et Archives nationales du Québec (BAnQ) is an invaluable source of documents concerning ancestors in Quebec. All the wills, marriage contracts, land purchases and business contracts mentioned in this story were found in the notarial documents there.

The BAnQ also has a collection of documents called tutelles et curatelles, or guardianships and curatorships. A tutelle is a court document in which a judge appoints a tutor and a sub-tutor to be responsible for the well-being of a minor, or someone under the age of 21.  A tutor would be required if the parents are living elsewhere, for example, or if a parent dies. The tutor’s permission is necessary if the minor wishes to marry, and the tutor is also responsible for the minor’s property and money.

In this case, after Mary Ann died, Stanley and a group of male relatives and close friends met with a judge. The judge appointed Stanley as Stanley Clark’s tutor, and the boy’s uncle, Gabriel Roy, as sub-tutor.

The tutelles et curatelles are interesting because they can reveal family relationships, the names and occupations of family friends and the names of notaries. That same notary may also have done an inventory of the deceased’s estate, or looked after other family business.

If one of your Quebec ancestors died leaving minor children, you should search the index to tutelles et curatelles at the BAnQ. The archivist on duty can help you find the index and the actual court documents. You will need to have with you the family name and the date of death of the parent. If your ancestors were in the Quebec Judicial District (around Quebec City) the guardianship index and documents 1639-1900 are online at https://familysearch.org/search/collection/1399459. Other guardianship documents will come online eventually.