Reinventing Themselves Has Been Launched

It has been almost 200 years since my paternal ancestors came to Upper Canada from Scotland and took up farming here. It has been about 12 years since I started researching and writing about them. Now that I have pulled all their stories together into the pages of a book, it is time to celebrate. Earlier this week, relatives and friends helped me launch Reinventing Themselves: A History of the Hamilton and Forrester Families. We got together on Zoom, a solution that was perfect considering that the descendants of this family are spread from Montreal to Toronto, Winnipeg, Vancouver and across the United States. 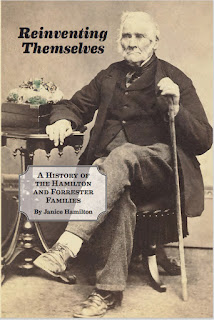 This collection of short articles traces the descendants of weaver Robert Hamilton and carpenter David Forrester. The two Scottish immigrants and their families came to Upper Canada in the 1830s and became part of strong farming communities. Fifty years later, both families moved west. The Hamiltons were founding settlers of a temperance community that eventually became Saskatoon. The Forresters took up prairie farming in southern Manitoba. The following generations continued to reinvent themselves, with several pursuing careers in Winnipeg, Manitoba. Among them were physician Thomas Glendenning Hamilton and his wife, nurse Lillian Forrester – my grandparents. After their young son died in the 1919 influenza pandemic, the couple began holding seances, and their research into psychical phenomena brought them international fame. Many of the articles about the Hamilton family have previously appeared on my blog, Writing Up the Ancestors, but pulling them together into a cohesive thread makes the ancestors’ story easier to follow. Much of the material about my grandmother’s family, the Forresters, will be new to most readers. Reinventing Themselves is available from the online bookstore at https://store.bouquinbec.ca/reinventing-themselves-a-history-of-the-hamilton-and-forrester-families.html. It is $20.00 Canadian for the paperback version, or you can download the e-book for $10.00. Shipping is $6.50 shipping to Canada and $15 to the United States. Most of the books for sale on that site are in French, but the order form is in English. The process of reinvention is continuing, as the book has inspired two videos. Tracey Arial interviewed me for her podcast Unapologetically Canadian and Frank Opolko, a friend who recently retired from the CBC, also interviewed me. I learned a great deal while doing this project. Best of all, I discovered several living cousins who were previously unknown to me. One new cousin instantly felt like an old friend, and the mystery person who is my closest match on Family Tree DNA has turned out to be a Forrester descendant from Michigan. This project reminded me how challenging it is to write about genealogy. All I know about many distant ancestors is their dates and places of birth, marriage and death. While this is essential information, such lists can make for boring reading. The family stories are the good stuff, and they have been the focus of the articles on my blog. Of course, there are two types of family stories: anecdotes that may or may not be true, and well-documented facts. I was also reminded how much discipline it takes to complete a project of this magnitude. I recently overheard my husband tell someone that he didn’t dare come near my office while I was working on the book because I would chase him away. There are so many distractions, especially on the Internet, that it really takes discipline to stay focused, and a project this size inevitably takes longer than expected. Now it is time to take a break from family history, catch up on reading novels and enjoying summer before turning my attention to my mother’s family. Note: the video of the interview can be viewed at https://genealogyensemble.com/2021/06/23/reinventing-themselves-has-been-launched/
Posted by janhamilton No comments:

I have taken advantage of all the extra free time at home over the past year to write a family history book about my father’s ancestors. It has been the perfect pandemic project, but now it is almost time to launch it into the world.

This book brings together the many blog posts I have written about my father’s extended family over the past eight years for my personal family history blog, Writing Up the Ancestors, and for the collaborative blog Genealogy Ensemble. As someone once told me, a blog is a good cousin catcher, and indeed, blogging has allowed me to connect with cousins I never knew I had. Also, I got a lot of the research done and written up in small bites. But the stories about the Hamilton and Forrester families (my paternal grandmother was a Forrester) jump all over the place on the blog; in the book, they are in historical sequence and geographical context.

A book that you can hold in your hands and store on your bookshelf for years also feels more permanent. People read a blog post, then jump to the next shiny object on the Internet. You might only read part of a book, or look at the photos, but you can keep it for a long time and pass it on to the next generation. I’m dedicating this book to my grandchildren, in the hope that one day, maybe 50 years from now, they will sit down and discover all the astonishing things their ancestors risked and achieved.

I have called this book Reinventing Themselves: a History of the Hamilton and Forrester Families. These people reinvented themselves several times. Most male members of the immigrant generation grew up in lowland Scotland where they were weavers, stonemasons, tenant farmers and carpenters. When they landed in Upper Canada around 1830, they had to reinvent themselves as farmers in an unfamiliar climate. Members of the next generation retained most of their Scottish customs and religious beliefs, but moved on to a new landscape as they became grain famers on Canada’s western prairies. Their sons and daughters were the first to give up farming and forge careers in the city.

Many Canadian pioneer families followed similar paths, so what makes this story special? Part of its value is that it does represent the experiences of many 19th century immigrant families.

Luckily, many accounts of my ancestors’ unique experiences have survived. In a letter to his father back in Scotland, immigrant Robert Hamilton (1789-1875) recounted the family’s voyage across the Atlantic. Fifty years later, his granddaughter Maggie Hamilton (1862-1886) wrote a letter from Saskatoon in which she described baking bread for the government soldiers following the North West Rebellion in 1885. Fast forward another eighty years and Charles Forrester (1889-1984) wrote a book about life on the farm near Emerson, Manitoba, from hauling water for the livestock to singing Scottish ballads at family gatherings.

I used to envy people who were members of various ethnic groups. They seemed so exotic, while my ancestors seemed pretty boring. But writing this book has helped me appreciate the values these Scots brought with them: their deep sense of community and their competitiveness, their love of books and learning, their love/hate relationships with alcohol, and their strong work ethic.

The book also has its share of surprises, from the discovery of my great-grandmother’s illegitimate birth and the story of brothers who were globe-trotting plant collectors to the death of my father’s twin in the 1918 flu pandemic and my grandparents’ subsequent investigations into psychical phenomena.

The research, writing and editing are done. It’s too late now for changes, although I will always be itching to tweak something. The manuscript and many, many photos are in the hands of a book designer. I’ll let you know soon when and how to get a copy.

This article is also posted on the collaborative blog Genealogy Ensemble.