Phineas Bagg had his back to the wall. He was deep in debt, with no money to repay his creditors. They had taken him to court and the judge had authorized them to split most of his farm between them. With few assets left, Phineas risked being sent to debtor’s jail. In post-revolutionary New England, that was often equivalent to a death sentence.

Phineas hadn’t always been poor. He was probably born the eighth child of David Bagg and his wife Elizabeth Moseley in 1751. David was a yeoman, or farmer and landowner, in the town of Westfield, Massachusetts, in the fertile Connecticut River Valley.

After Elizabeth’s death in 1759, David moved to nearby Blandford and remarried; however, his second wife died within a year. Around 1764, David moved the family to Pittsfield, a growing but isolated community in the rugged Berkshire Hills of western Massachusetts.

When the American Revolution broke out in 1775, Phineas volunteered to fight, as did his father and most of his brothers. He marched with Pittsfield militia units and volunteered with the Continental Army.

He married Pamela Stanley, who was originally from Litchfield, Connecticut, in Pittsfield in 1780. Over the next decade, they had four children.

Phineas purchased a farm of about 100 acres in Pittsfield in 1777. Following local farming practices, he would have cleared a relatively small section of the property in order to grow Indian corn and wheat, as well as some vegetables and apples. New England farmers usually only grew enough crops to feed their families, with a little surplus to trade with local merchants for essential supplies such as sugar and nails. But after the War of the Revolution, merchants started demanding cash and many New England farmers fell into debt.

Although it is not clear how he got so deeply into debt, Phineas’s financial meltdown seems to have started around 1793, about the same time as his wife died. He mortgaged the farm to the Union Bank for $500. A year later, three creditors took him to court for debts totaling about 44 pounds and he was forced to give each of them several acres of the farm as repayment.

In 1795, ten additional creditors to whom he owed a total of $650, including substantial court costs, assessors’ fees and inflated travel expenses, won similar judgments. To repay them, Phineas lost another 62 acres of farmland, the barn and half his house. If he had not been able to pay off his debts this way, the court had commanded the sheriff to “take the body of said Bagg and him commit into our gaol” until his creditors were satisfied. 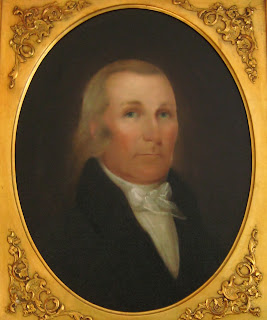 Phineas Bagg in his later years, a tavern-keeper in Montreal

Some time between 1795 and 1797, Phineas gave up. He and the children and Ruth Langworthy, a young woman with whom he later had a child, headed north along the Indian trails and military roads toward Lake Champlain and Lower Canada to start a new life.

Notes: I researched most of this article during a trip to the New England Historical Genealogy Society (NEHGS) in Boston a few years ago, scanning the microfilms of land records. Most of the BMD records for colonial Massachusetts are on the NEHGS website, www.americanancestors.org. Since then, these early New England land records have become available on www.familysearch.org, and the Massachusetts Town and Vital Records are now on Ancestry.
Posted by janhamilton