Glimpses of a Life


David and Margaret Forrester died almost 150 years ago, but their gravestone is as readable as if it had been carved yesterday. When I visited the Ontario cemetery where they were buried, I spotted David’s name right away, although I had to sweep away the previous autumn’s leaves to find Margaret’s.  Like the lives of many immigrant women at that time, her life was almost invisible; only a few key records in her native Scotland and some tantalizing stories about her experiences in Canada remain.
Margaret Drummond was baptized September 10, 1788 at Inverarity Parish Church, Forfarshire. Her father was the head gardener of an estate and Margaret, her sister and two brothers grew up in a cottage nearby.
She married David Forrester in June 1813. According to a family story, she married him after being jilted by another man and felt that David, a wheelwright, was beneath her.
The baptismal record of their only son, James Drummond Forrester, born in 1823 at Lochside in the town of Forfar, reveals that James was their third child; two others had died as infants.
Passenger records show the family arrived in New York on Aug. 5, 1833 aboard the “Chase”.  Family legend says they were rescued from a shipwreck en route, but different versions of the story say this happened near Cape Hatteras, New York and Nova Scotia, so the story needs further research.
They made their way to Upper Canada and, in 1834, David inquired about a lot in Belleville "as I am newly come to the country and wishing to have my family settled near the town so that I may work at my trade as a carpenter”.  In 1849, he obtained title to a 100-acre farm in Tyendinaga Township, near Belleville. The soil was rocky in places, marshy in others, but fertile enough for profitable farming. The Forresters eventually replaced their little log house with a two-storey red brick home. 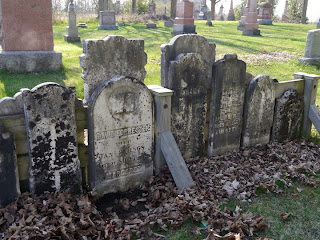 Margaret Drummond Forrester died April 20, 1869, a year after her husband passed away. She was 81. They were both buried in Gilead St. Andrews United Church Cemetery, a few miles from their farm. About 10 years later, their son and his family moved to Manitoba.
Shaded by a stand of tall maple trees, Gilead St Andrews is on a quiet rural road. The older gravestones, including that of the Forresters, must have fallen over at some point and someone has lined them up and secured them together.  With the couple’s descendants now spread from Manitoba to California and Montreal, it is comforting to know that someone is looking after their grave.


Notes on sources: This article is a good example of why it is important to keep track of your sources as you go along. I wrote it recently, based on research I did several years ago. The information comes from a variety of sources, including Family Search, Scotland’s People and New York passenger records on Ancestry, but I will have to revisit all these sites for the proper references. Darn!
The family stories came from notes my grandmother made. She loved telling these stories, but my own research suggests that accurate details were not her strong point. Her stories have to be taken with a grain of salt, but they are still fun.
The information on land records in Belleville and Tyendinaga was given to me by a cousin. She found these documents at the Ontario Archives, but did not write down the full references at the time, so I will have to go there.
I found the location of the Forresters’ grave on a site that lists Hastings County burials of people born before 1800, www.rootsweb.ancestry.com/~onhastin/BMD/early.htm. The best part of the research process, of course, was visiting that cemetery and Inverarity parish church. There is a new public garden in Forfar, Scotland, built in memory of Margaret’s brothers, James and Thomas Drummond, both of whom were botanist explorers. A return trip to Forfar to see that garden will be a pleasure.