Christ Church Cathedral in Waterford, Ireland is has been the site of many weddings in its 900 years of existence. One of them marked a turning point in early Irish history, another was an important union in my family’s history.

In 1170, the marriage of Strongbow, a Norman lord from England, and Aoife, daughter of the King of Leinster, was part of a sequence of events that resulted in the Norman conquest of Ireland.1 In 1844, my great-great grandparents were married at the same location, a few years before they immigrated to Canada.

The original church, on the crest of a small hill overlooking the city of Waterford and the River Suir, was built by the Vikings in 1096. The Normans constructed a new cathedral on the same spot in the early 13th century, but in the 18th century, city officials persuaded the bishop that the medieval-style cathedral was too old-fashioned and should be replaced. The new building, now Church of Ireland (Anglican) rather than Catholic, as it had been originally, was completed in 1779. It was designed by local architect John Roberts, who also designed much of Georgian-era Waterford as well as the city’s Roman Catholic cathedral.2

Christ Church has not changed a great deal since my ancestors were married there on September 10, 1844.3 Then, as now, it had a tall spire, a simple but elegant exterior and a pastel-coloured ceiling decorated with white stucco floral designs. Today, two magnificent Waterford crystal chandeliers hang from the ceiling. Perhaps the bride (my future great-great-grandmother) paused in the spacious atrium between the front doors and the sanctuary to arrange her wedding veil before entering the church. According to family lore, her daughter Clara wore the same veil, and so did my grandmother Gwen, my mother and several other family brides.

That day, the bride was Martha Bagnall Shearman (1826-1897), daughter of Thomas Shearman (1785-1850) of Waterford and Charlotte Bennett Clarke (dates unknown).4 The Shearman family had originally come from England to Ireland around 1650 and settled in County Kilkenny. Charlotte was the daughter of the late Charles Clarke ( -1830), whose firm made wrought iron, pewter and brass goods in Waterford.5

The groom, Charles Francis Smithers (1822-1887), was the son of London merchant Henry Keene Smithers (1785-1859) and Antigua-born Charlotte Letitia Pittman (c. 1785-1861). According to Slater’s 1846 National Commercial Directory of Ireland, he lived on Bachelor’s Walk in Waterford and worked as a pork butcher.

The first of their 11 children was born in 1846 while Charles and Martha were still in Ireland. Their second child was born in London in 1847, the year of Ireland’s terrible potato famine. By the autumn of 1849, they were living in Montreal, and from then on the family moved back and forth between Montreal and New York City.6 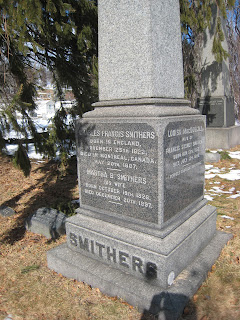 Martha was not the only member of her family to leave Ireland. Her brothers Thomas and Henry immigrated to Brooklyn, New York, as did her sister Mary Anne, while her brother Robert Clarke Shearman settled in New Zealand. Martha and Charles no doubt felt they made the right decision to leave Ireland, as economic and political difficulties continued there for many years. And for Charles, North America offered great career opportunities: he was president of the Bank of Montreal from 1881 until his death in 1887.

Charles and Martha are buried together in Greenwood Cemetery, Brooklyn..7

My Shearman Brick Wall, Writing Up the Ancestors, February 9, 2014, http://writinguptheancestors.blogspot.ca/2014/02/my-shearman-brick-wall.html. I have recently learned a great deal about this family’s Irish roots and will write about them over the coming months.

Henry Keene Smithers, Non-Conformist, Writing Up the Ancestors, Dec. 1, 2014. http://writinguptheancestors.blogspot.ca/2014/12/henry-keene-smithers-non-conformist.html. This is one of several articles I have written about the Smithers family in England.

1. In 1166, 100 years after the Norman conquest of England, Dermot MacMurrough, the deposed King of Leinster, Ireland, asked for help from the Normans to recover his kingdom. Strongbow, the nickname of English-Norman lord Richard fitz Gilbert de Clare, agreed to send a fighting force to help. In return, MacMurrough pledged the hand of his daughter Aoife. The promised troops attacked Waterford in 1170 and Strongbow and Aoife were married in the Viking church overlooking the city’s ruins.

Across the Irish Sea, King Henry II of England worried that Strongbow was too successful and might eventually conquer all of Ireland, so in 1171, Henry sailed into Waterford harbour and from there marched to Dublin, where all the provincial Irish kings submitted to him as Lord of Ireland.

Over the following centuries, the Normans sealed their power in Ireland by building well-fortified castles. Meanwhile, many of the Normans who settled there slowly adopted Irish customs and language.  The descendants of Strongbow and Aoife were members of English, Scottish and Welsh nobility. As far as I know, I have no ancestors among them.

3. The wedding date is mentioned in the privately published family history Smithers Family Book, compiled by Elizabeth Marston Smithers and printed in 1985. I confirmed the date several years ago with Church of Ireland Registers obtained from the Waterford Heritage genealogy center.

5. My information about the Shearmans comes from notes forwarded to me by a distant cousin whose Shearman ancestor immigrated to New Zealand. Those notes come from a genealogy prepared in 1853 by John Francis Shearman and stored at the archives of Maynooth University, Republic of Ireland. I will be writing about the Shearman family in more detail in the coming months.

6. The sources of the information in this paragraph come mainly from Canadian and U.S. federal census records. I will write in more detail about Martha and Charles and their family shortly.

7. According to their gravestone in Green-Wood Cemetery, Martha was born Oct. 19, 1826 and died Dec. 20, 1897, while Charles was born Nov. 25 1922 and died May 20, 1887. I have found no other documentation other than the gravestone for either of their birth dates. I confirmed Martha’s date of death with several other sources, including the New York, New York Death Index, 1862-1948 on Ancestry.ca. Charles’ death date is confirmed in the record of his funeral service at Emmanuel Congregational Church in Montreal, which can be found in the Drouin Collection on Ancestry.ca.